Tomorrow sees the start of the Horology in Art  Symposium sponsored by the National Association of Watch and Clock Collectors (NAWCC) at the Museum of Fine Arts in Boston.  A few weeks ago I spoke with Bob Frishman the chairman of the NAWCC symposium committee.  Here’s some of what he said about the event.

MC: What drew you to the subject of Horology and Art?

BF: All of you know what horology means, the science of time keeping but probably a decade ago I started to notice that there were fine art images that had clocks and watches in them. I love fine art and I always enjoy going to museums but I became fascinated by seeing early fine art images, as I am more of a traditional representative art person, that show clocks and watches.

I was at an auction at Skinner [in Boston] and there was a reverse painting on glass of an Asian woman holding up a clock.

It’s one of those sad auction stories where the auction specialist assures you that the bid you leave will be more than adequate to get the item. Lo and behold I was outbid and I didn’t get it but I have a great image of it and I look at it from time to time. You always remember the ones you didn’t get perhaps more than the ones you did. 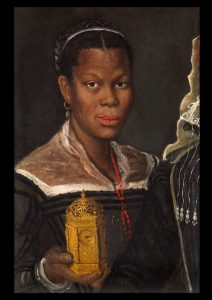 Shortly after that, I saw in a Christie’s catalogue a 17th century painting by Annibale Carracci of an African woman in western dress holding a small gilt probably German table clock.

That intrigued me as well. I got permission from Christie’s to reproduce the picture on the back of the NAWCC magazine.  I said here is an interesting example where we are seeing clocks and watches in their original state.

They are not antique in these paintings they are brand new and they are always there for a reason. That’s the theme of the symposium as well as the now thirty-five articles I’ve written on in the NAWCC magazine on Horology and Art themes where I take a painting that has a clock or watch in it I talk about the artist and the context, the period and then the timepiece that’s in it as well.

I began doing those articles – the first was a wonderful painting by Jacques-Louis David, the French artist, showing Napoleon standing in his study in the middle of the night. The clock is a beautiful and probably very expensive regulator standing behind him showing that it’s about three twenty in the morning and he’s still at work for the French people.

That was the first of those articles. I have now progressed through the entire spectrum of art up to the present day.  I have written about a lovely Jamie Wyeth painting that he did in his studio on Monhegan Island with a lovely early tall clock in the background. I’ve met Jamie Wyeth and he still owns that clock.

It’s been a wonderful voyage and the culmination or one of the culminations will be this symposium.  When I was asked to be the chairman of the symposium committee I said I think I want to do it but you have to tell me that I can do a symposium on Horology and Art because that’s really my passion. And the NAWCC said if you want to take the job you can do whatever you want.

MC: How long have you been working on this symposium?

I became chairman of the symposium committee more than three years ago. It’s easily been that long unless you want to take into consideration the ten years previous to that when I was researching and collecting and writing about such paintings.

MC: How exactly do you put a symposium like this together?

One of my self-imposed missions when I took over the symposium committee job was to have these events in important cultural venues. Previously they’d been in some minor city in a non-descript hotel and not many people came because there was no other draw other than the topic. So I said I’m going to have these in important cultural institutions preferable ones with horological collections.

The first thing is finding an important venue. I happen to know some of the curators at the Museum of Fine Arts in Boston.  I said to them I’d love to do something at the MFA.

So, this year when I was trying to recruit particularly art history scholars. Saying I’m having a symposium at the Museum of Fine Arts in Boston would you like to come and talk helped. Even though it is not an MFA event.

And there has never been a conference or a symposium on this subject before and there is only one book by Alfred Chapuis an interesting horologist. It’s a thin little book with black and white photos. So this is all new ground that I am happy to be ploughing.

MC: What exactly do the timekeeper in these painting represent? 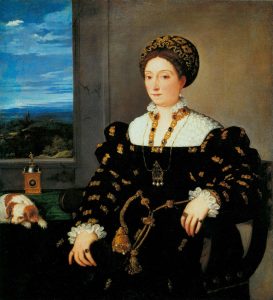 Often, particularly in some of the iconic paintings for example Titian’s painting of the duchess of Urbino where you see a woman in her finery, a little dog, a window through which you see the province of Urbino and there’s a little table clock.  The watches and clocks in these paintings are not there by accident. These are not Snapchat images.

The artist and the subject decide what’s going to be in the painting. It could be a lot of things or a few things but when they decide to put a time keeper in there it’s on purpose. And, it’s almost uniformly in there for metaphorical or symbolic reasons. Particularly when clocks were new and exotic. They were symbols of modernity, affluence, discipline, mechanical innovation and mortality. There is no more telling symbol of the fact that we are all here for a shot time than a clock staring at you from a painting.

This was not news to anyone who was either painting a picture or looking at the painting that a clock had a very heavy symbolism and if you put it in a painting it is there for a reason.

MC: You also sent me a photo of Malcolm X by the photographer Eve Arnold.  By the time we get to Malcolm X what’s a watch saying in an image like that? 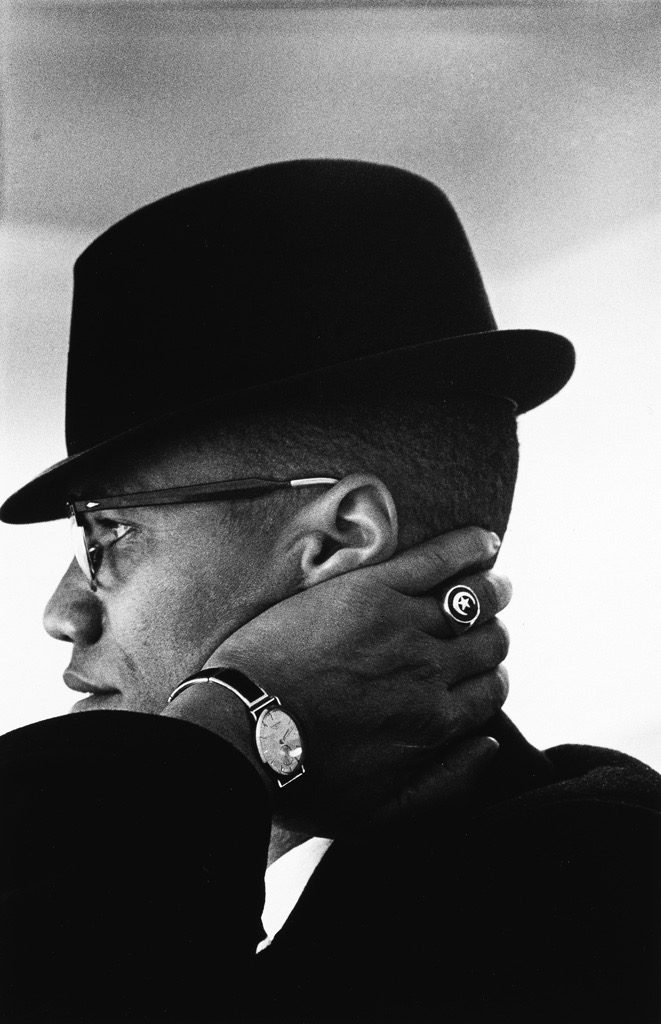 There’s that whole notion of watches as one of the only acceptable forms of male jewellery – in any case this photo shows this person has on a nice watch.

I just found a fantastic portrait done in 2005 of John F Kennedy Jr. done before he tragically died. On his wrist is a watch you can’t quite see what it is but that is not there by accident he was wearing it on purpose and the painter included it on purpose.

In the Eve Arnold photograph of Malcolm X it’s a profile photograph, his arm is raised his wrist is visible and there’s a nice watch on his arm.  It could be saying that I maybe a radical but I still appreciate fine things like this wristwatch. It could be getting even deeper and be making a statement about my time maybe short and it Malcolm X’s like with Martin Luther King his time was perhaps much shorter than anyone expected.  So, you’ve got the symbolism there, you’ve got the jewellery issue there but it’s more than just accidental. Eve Arnold could have taken another picture from the other side showing the other arm and you wouldn’t have seen the wristwatch.

MC: During the height of mass production of watches particularly here in New England do watch and clocks in art mean something different again?

Yes, there are lovely genre paintings, American genre paintings where you’re even seeing frontier houses and on the mantel is a Connecticut shelf clock. Again, these people have arrived at the point where they are able to have that shelf clock and they have that element of discipline, this is a disciplined house it runs by the clock they don’t just get up when the sun rises and the clock crows they’ve got a time piece there. Even earlier in depictions of early New England in the early eighteen hundreds and late seventeen hundreds where within the depiction of a domestic scene where perhaps there’s a wake happening or a party happening in the corner there’s a tall case clock and that’s announcing that this family has the sophistication and the affluence even though they are in the colonies or early America. They have arrived they have a tall case clock which is often the most expensive item they own.

MC: What happened when you stated to ask speakers for the symposium? Horology is not a subject that leaps to mind when we think of art history.

Some art historians never got it. They didn’t understand. As soon as I explained the symposium they said, ‘But I don’t know anything about clocks and watches’. I said I don’t want you to talk about clocks and watches in the paintings I want you to talk about the paintings. They never got past that. But luckily the group that are speaking who said You know your right I’ve seen those clocks and watches in those paintings and I’ve always wondered about them or thought about them and I never really had the opportunity or the forum or the reason to delve into why those objects are there.

It’s a great opportunity for the open minded ones to do some original research and to hear the results of the research done by others.