This is a story about a legendary actor, fast cars, a boy with a camera, a coincidence, a tree house, a decade-long friendship and a watch.

That’s what I wrote in my notebook after a long Skype conversation with Paul Boutros of Phillips and Paul Lerner of Optimist Consulting. My notebook comment was wrong or I should say incomplete but more about that later.

The date was 28 February 2017 a Tuesday morning for me lounging in the heat and sunshine of Hua Hin, Thailand. A chilly, dark Monday evening for Mr Boutros and Mr Lerner back in New York. (The formality is necessary there are a lot of Pauls in this story.)

Mr Boutros and Mr Lerner (okay, no more formality from now on they are the two Pauls or both Pauls) sent an email a few days earlier saying they wanted to talk about the biggest watch story of 2017.

That sort of message pops into my inbox often. Not because of me, you understand, but because I write about watches for the Wall Street Journal. Some luxury watch brands have told me that Journal readers buy nine out of ten watches they sell in the US. Most of the time the content of those emails is insignificant – maybe a new dial colour a new complication – no big deal.

An email from the two Pauls though is different.  These guys are heavy hitters who know what they’re doing. I was certain that what they wanted to talk about would be important. As soon as our time zones allowed I Skyped them.

Right from, ‘Hello, How are you’ I felt the two Pauls would not disappoint. They were bubbling with excitement. Both Pauls were so enthusiastic it seemed as though they were in Thailand with me – which I’m sure they would have liked considering the difference in temperatures.

Then, one of the Pauls, honestly I don’t remember which one, said these words: ‘Michael, we have Paul Newman’s Paul Newman Daytona and we want you to write about it in the Wall Street Journal.’ 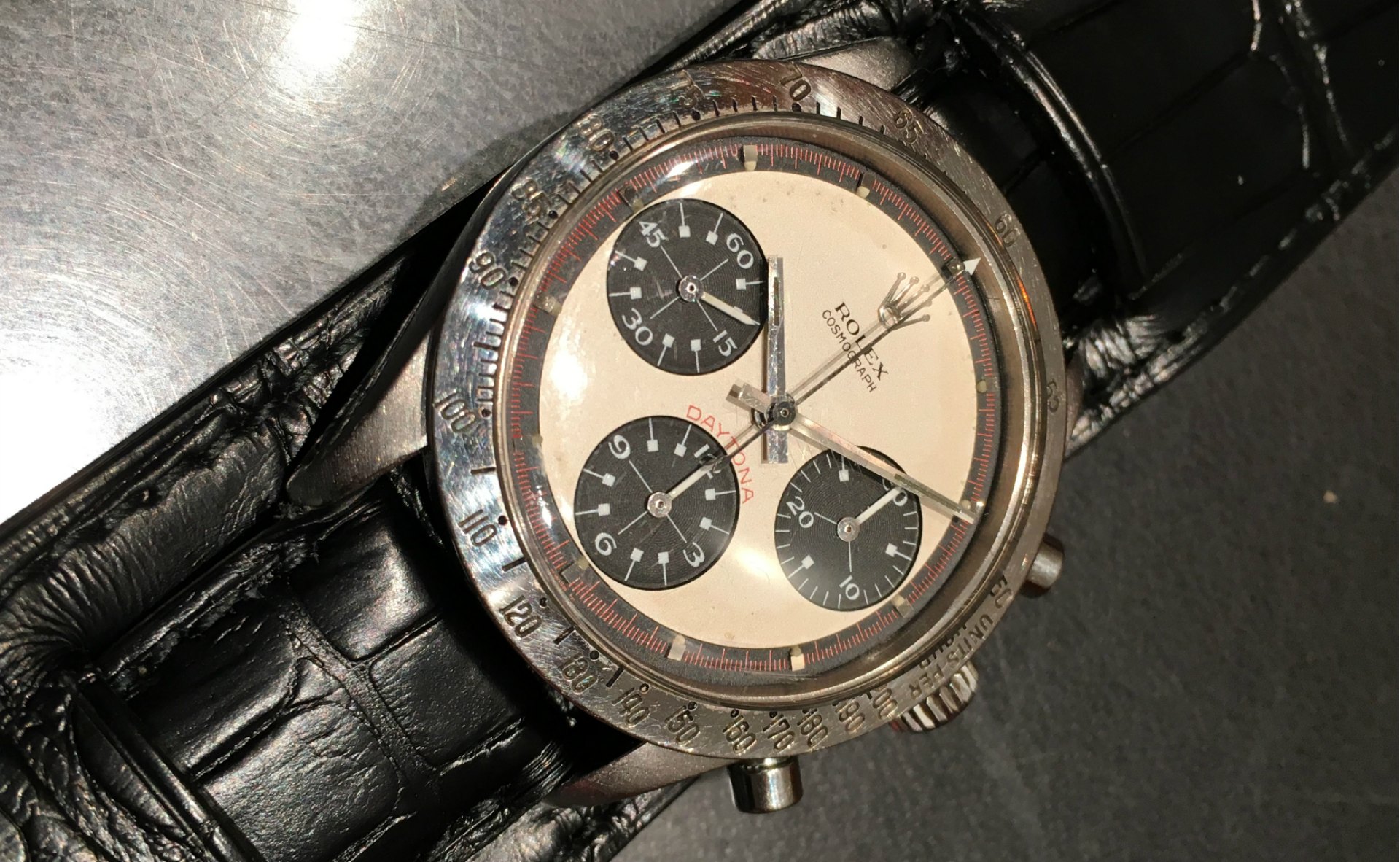 Everyone who knows me knows I hardly ever shut-up. I love talking. But the next thing I heard that day was Paul Lerner saying, ‘Michael, are you there? What’s happened? Are you there? We’ve lost the connection.’

Of course, we hadn’t lost the connection. Saying I was speechless doesn’t quite do. Only a British/Irish expression works in this case – I was gobsmacked. (Gob is mouth and smacked is well, smacked.) When you are gobsmacked you are beyond speechless – you are utterly astonished, shocked, flabbergasted, overawed, the wind is knocked out of you. I was all that and more.  I couldn’t talk. I couldn’t move. After a few seconds my jaw flapped but no words left my mouth. Then I heard something garbled – me talking.  ‘You have Paul Newman’s Daytona?’  Honestly, I thought I would start crying. I would have said ‘This is not possible’ but this was the two Pauls speaking through my computer so it had to be true. Like I said these guys know what they’re doing.

Then I heard Paul Boutros saying, ‘Yes. It’s the reference 6239, white dial, stainless steel case and the inscription from his wife Joanne Woodward engraved on the back. You know the one, Michael.’

Yes, I thought. I do know the one you mean. There are famous mysteries in the world such as where is the Amber Room where are the paintings stolen from the Isabella Stewart Gardner Musem, where is the pencil box I lost in the third grade? (Marybeth O’Connor I know it was you!)  The watch world’s equivalent of all that is: Where is Paul Newman’s Paul Newman?

The two Pauls then told me the story of the watch. That was the first I heard of James Cox, Nell Newman, the tree house and Paul Newman’s gift to James and James’s decision to sell the watch at a Phillips auction in New York in October and give most of the money to Nell Newman’s foundation. You can read about that HERE

The rest of the conversation concerned when and where in the Wall Street Journal the story should appear and what would be the exact nature of the Journal’s exclusive.  Eventually these discussions were conducted and concluded by the features editor a WSJ. Magazine, Leonora-Jane Estes whose experience at this sort of thing far exceeds mine.

The two Pauls and I met in March at BaselWorld where a few last minute details were ironed out and within a week of the fair ending we were in go mode.

But Basel presented a dilemma – how to keep my mouth shut. As I said earlier talking is a much-loved pastime of mine. That week in Basel meant walking around the world’s biggest watch fair seeing many friends and not being able to say anything about the story while I was bursting to tell everyone.  So, I devised a sublimation tactic. The topic of Paul Newman’s Paul Newman is an easy one to bring up in conversations with watch geeks. That’s what I did, asked dozens of people: ‘What do you think would happen if Paul Newman’s actual Paul Newman Daytona showed up? What to you think it would go for?” Everyone I asked had an answer. My favourite came from Simon Michlmayr of British brand Garrick Watches. Simon sighed and said: “We’d scream, shout and then probably faint. Then go out a try to raise $10 million to buy the thing.”

Some of the people I asked said that because of the great value of the watch if anyone had it they would have already have offered it for sale. (Not true I thought, not true. You’re in for a surprise.)  Others added they thought the watch was lost forever. (Another not-true-you’re-in-for-a-surprise moment. I was starting to enjoy this.)

Although born on the East Coast James is now a cool, relaxed West Coast entrepreneur who happily recounted the astonishing story of watch. Nell is a vibrant woman with ready laugh who often got me laughing.  We grew up at roughly the same time in Fairfield County, Connecticut and shared agreeable memories about places like Westport’s Ice Cream Parlor and Remarkable Book Shop.

As for Aurel Bacs – anyone who knows the man will acknowledge that talking with Aurel is always an educational experience. 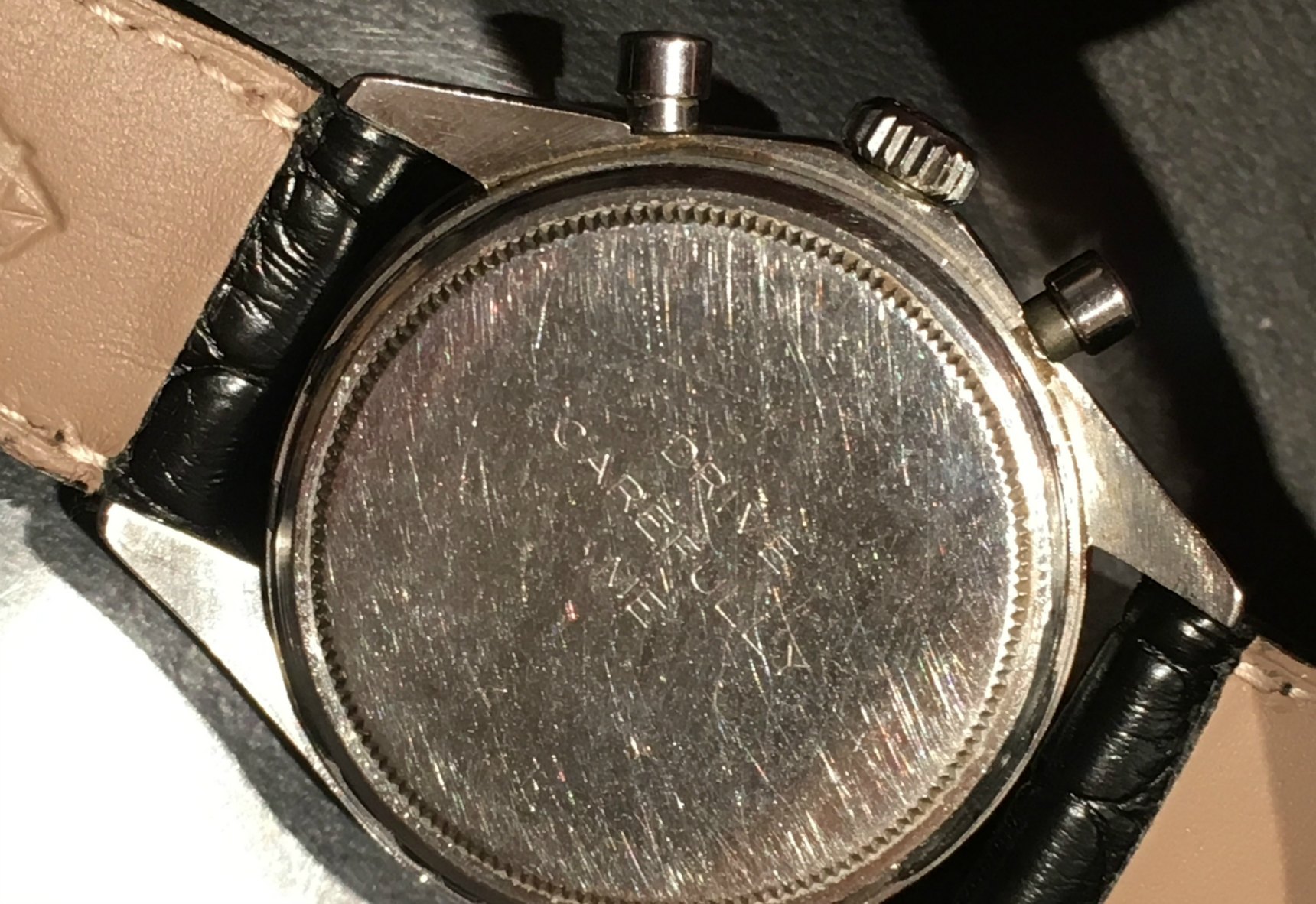 Along with the interviews came additional research; reading books and magazine articles about Paul Newman, about the Daytona, and, of course, hours on the Internet followed by the enjoyable task of viewing Newman’s movies.  That work led to a re-evaluation of three urban myths surrounding the watch: two are untrue while one is unproven.

Myth One: Paul Newman wears the watch in the 1969 movie ‘Winning’. No, he does not. In the film Paul Newman is wearing a chronograph with a white dial and a metal bracelet but it is not a Rolex. Joanne Woodward did not purchase the watch until after the completion of ‘Winning’.

Myth Three: The unproven myth is the one about Paul Newman wearing the watch on the cover of an Italian men’s fashion magazine. That cover, legend has it, started Italian collectors calling the 6239s with the exotic dial Paul Newman Daytonas. I have never seen this magazine cover despite spending hours in the magazine section of second hand bookstores in Italy ploughing through stacks of old magazines while dust clogged my throat. Paul Boutros sent me an image of a Spanish magazine cover showing the actor wearing the watch. Could that be the cover responsible for the nomenclature? Maybe.

If anyone has seen or even better has a copy of an Italian magazine with Paul Newman on the cover and the watch clearly visible please let me know. 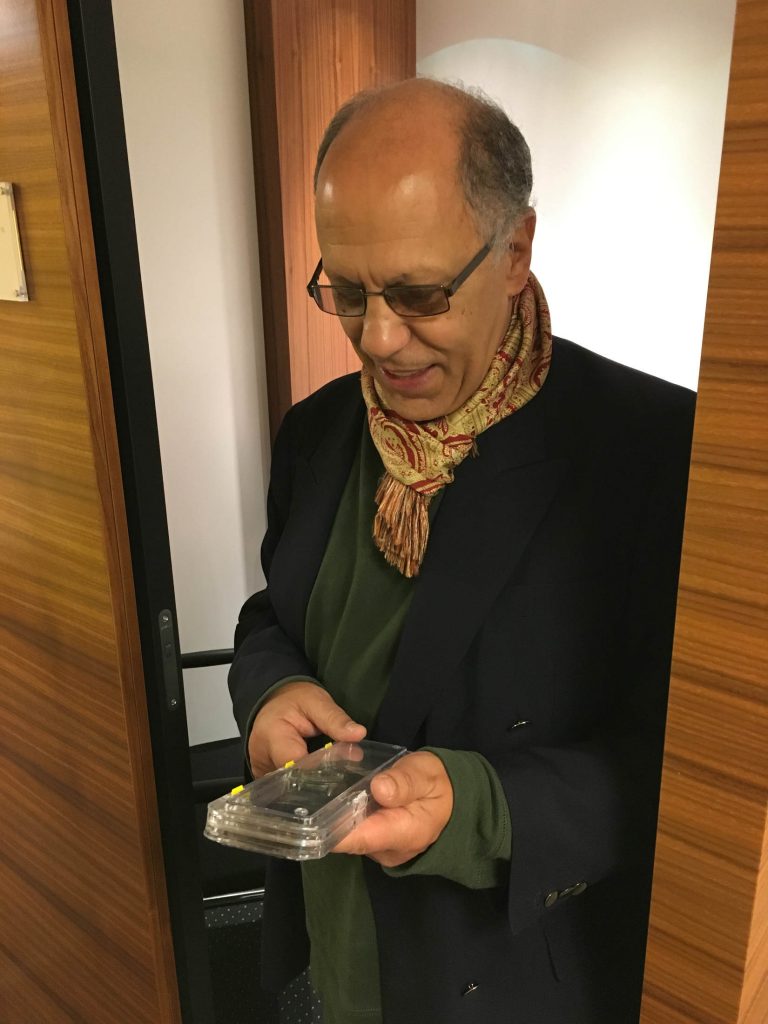 In May when work on the article was mostly finished I flew to Geneva. People who saw me there naturally assumed covering the May auction was the reason for my visit.  Actually, I was there to see Paul Newman’s Paul Newman.  Early on the morning of Thursday May 11 Paul Boutros met me outside a bank in Geneva.  We entered the bank, descended into the vaults. I kept thinking this is a Swiss bank vault how much money/gold/jewellery is in here! While I sat in a little cubicle Paul and one of his Phillips colleagues retrieved the watch from a safe deposit box.

For two months the watch had been a part of my life finally meeting it face-to-face was a calming experience.  I was holding and soon strapped on Paul Newman’s Paul Newman. Time to relax and enjoy the moment. Once again the beauty of the watch struck me, a testament to Joanne Woodward’s good taste.

Since the article appeared a few people have asked me why the watch is shown without a strap. The reason is the cooperative nature of journalism nowadays. The strap presently on the watch is new it is not the one Paul Newman wore. The photographer Henry Leutwyler decided the pristine strap and the watch with its patinated dial visually did not gel. The two just didn’t look right together. Henry asked for the strap to be removed. His photograph emphasises the beauty of the watch. I do not know Henry but I think he made the right move.

Journalism in a magazine like WSJ. involves a writer and the people interviewed and also an editor (the aforementioned Lenora Jane, the photographer and on this story WSJ.’s fact checker Dacus Thompson – everyone makes a contribution.

Maybe things really do move in a circle, like the hands on a watch.